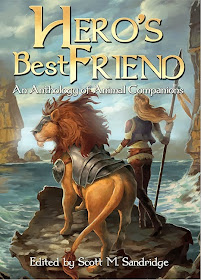 Can you tell us a little bit about "Hero’s Best Friend: An Anthology of Animal Companions?"

The idea came up when I asked myself, “Where would Gandalf be without Shadowfax? Or the Vault Dweller without Dogmeat? Or how far could the Beastmaster have gotten without all the animals that had helped him?”

Hero’s Best Friend is an anthology of short stories where the animals take center stage instead of just being the mere sidekicks of the heroes. The majority of the stories fall within the Sword & Sorcery and Heroic Fantasy genres, but many genres are represented—including Dark Fantasy, Science Fiction, and Cyberpunk. There is also a diversity of animals represented from housecats (normal, magical, and even genetically modified) to tigers, dogs and wolves, birds and eagles, snakes…even an undead armadillo.

What's your background with writing?

I currently have twenty-seven published short stories, about half a dozen published nonfiction articles, and as far as the reviews I’ve done since 2005 I stopped counting after sixty. I’ve also written a couple columns: Give it Meaning and Elements of Storytelling; SpecMusicMuse was also a column for a brief time before I moved it back to my blog. I was also a slush reader for Ray Gun Revival from 2006-2007 and the Managing Editor of Fear & Trembling from 2007-2010. I’ve currently edited three anthologies for Seventh Star Press: A Chimerical World: Tales of the Seelie Court, A Chimerical world: Tales of the Unseelie Court, and of course Hero’s Best Friend: An Anthology of Animal Companions. As far as I know I’m the only editor who was ever insane enough to edit three anthologies simultaneously.

Who are your inspirations/influences?

Edgar Allen Poe, Nathaniel Hawthorne, Margaret Weiss, Tracy Hickman, J. R. R. Tolkien, Algiss Budrys (who back in 2001 told me my work was publishable), Eugie Foster (who is also the best managing editor you could ever work for), Paul Levinson (who along with Eugie I think of as mentors), Bill Snodgrass (an awesome writer and editor who purchased my first short story), Johne Cook who to this day I still see as the epitome of modern-day Solomonic wisdom, Orson Scott Card, and Stephen Zimmer (one of the hardest working writers I’ve ever met). I’m sure there are a few names I can’t currently remember. Oh, and Stephen King. Can’t forget about the King.

What was it like working with Seventh Star Press?

One of the best small presses you can ever work with. Seventh Star Press has as part of their business philosophy the radical notion that authors and editors helping out each other, via through promotions, etc., also helps themselves. In a lot of ways I feel like I’m working with an extended family, which is a feeling I doubt a large press could give. Not since my time with Double-Edged Publishing have I felt at “home,” writing-wise and editing-wise.

Who was responsible for the cover/book design?

Enggar Ajar Adirasa was the cover artist. I gave him a couple ideas for the artwork, including showing him a Fallout 3 pic of the Lone Wanderer walking off into the sunset with his trusty canine, Dogmeat. That pic inspired the cover that you see, with the lion and the female warrior. The lion looking back toward the audience was his idea of showing that this anthology was about the animal companions taking the main stage instead of the heroes.

I plan to do my usual convention appearances, including book signings. A blog tour is also planned, which will involve reviews, interviews like this, guest posts, maybe even a couple giveaways. We did some release day promotions a couple months back, and HBF hit the Top 40 in Amazon sales within the first couple hours of release, and that was just on the ebook version alone (we also have paperback now). There’s been a lot of good feedback over it. So, I’m very hopeful that this will sell well.

One time I discovered the hard way that signing a book while intoxicated is not a good idea, because there’s a good chance you might misspell the person’s name.

The first time I did a book signing was at Context back in 2008. I didn’t get one single bite. The guy coordinating the con, Nick Winks, found out, so he personally came over to me, bought a book, and had me sign it for him before the convention ended. He made my day that day.

I’ve never been on radio, but I have done interviews on podcasts before. My first podcast interview was on Snark Infested Waters, hosted by Taylor Kent, aka the “Snarky Avenger.” Suffice it to say, being my first time getting interviewed, I was pretty nervous, but I had a lot of fun. Of course, that was also when I discovered that I sound like a country hick with a permanent headcold. Lol!

What is the name of your blog and what can readers expect to find there?

A Work in Progress. There you can find my old SpecMusicMuse blog-turned-column-turned-blog-again: reviews of books, movies, music CDs, interviews of authors and musicians, and an occasional article or two about the co-inspirational effects that music and storytelling have with each other. And every now and then I might talk about the story elements within video games as well.

I also do the usual shameless self-promotion there, too. ;)

What projects do you have planned for the future?

I’m often hesitant about talking about future projects anymore because my best laid plans tend to get kicked in the ass by Murphy’s Law. A lot.

But, so far it looks like one of my short stories will be reprinted in a vampire-themed anthology coming out soon (from a different press).

No promises at this point, though.

Is there anything else about you we should know?

Other than me being a Gemini with an Evil Twin in my head? Nothing much….
Walter Rhein
Share